No Cash for Clunkers! 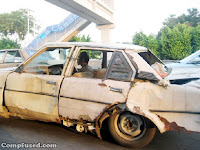 Playing trumpet is not a sit-back-and-give-it-a-go endeavor. You shouldn't sound like you are lounging on a couch watching TV with your legs crossed. You have to stay on this thing or it rules you. To be a master at it, you must be constantly mastering it. A casual half hearted approach won't get it done. You must tell the horn what to do. If you tell it nothing, that's how you will sound.

Two things are needed in your daily work: a good note and a good phrase of good notes. You need a centered, ringing, vibrant core to each note with no muffling or pinching. Even if slow is the only way you can do this, fine. You can play faster later. Next, you must know what you want to do with your nicely polished notes. They have to do something, go somewhere, say something. Each note must have intensity, direction and drive, not static and decaying boredom. Listen to the opening of Mahler 5, Pictures, Pines, or the Leonore calls. That's your goal: all good notes that make sense fitting into the phrase.

So, this is not brain surgery. All you need to do is play good notes and a good phrase. "No problem. That's what I do", you say? Well, listen again. Chances are you are a bit careless and not used to listening for and expecting first-rate quality from yourself. You don't need a ton of notes, just a few very good ones. Get used to producing top quality sounds even on the first notes of your warm up. You will get paid nicely at the end of the day if 95% of your note-production is juicy, sparkling, rich, resonant, focused and clear! There is no cash for clunkers!
Posted by Phil Collins at 8:06 PM No comments:

There you are roaming the aisles of your favorite music store again. You've got enough money to select only two items on your cart? What'll it be? You could go for a nice shiny mouthpiece, that new pricey etude book, a weighted valve cap, a buzzer, or dozens of the latest toys and gadgets.

If I had to choose only two tools that would bring me the best return, I'd go for a metronome and a tuner. Good rhythm and great intonation matters. You may have an awesome sound, admirable high notes or enviable stamina, but if your tempos are unsteady and you're always a bit out of tune, what good is it? How about committing to camp out with these two must-have companions every day and see what happens.

Now don't be complaining about the cost. It's a one-time purchase! You will have just saved yourself the price of many lessons. These miniature teachers will spare you the agony of hearing your professor yell at you for the same two issues lesson after lesson. "Fix your intonation, and please keep it steady!!" Let's put your professors out of business with these little tools. What's more, tuners and metronomes never complain. They just click and point. Some may even flash at you, but they never stamp their foot, or get irritated. Such a deal!
Posted by Phil Collins at 6:17 PM No comments:

The Purpose of Warming Up

The reason for a warm-up is to warm up! It should not be a burn-up or a fired-up session. If you tend to crash, then it is not a warm-up.

I remember one brass player many years ago in another country who warmed up so furiously and for so long, that he had to rest from his warm-up before attempting to play anything on stage! Something was horribly wrong. (He is no longer with us.) I would stand within earshot, and was in shock and awe at the amazing feats that were being attempted as he began his day. He would blow non-stop through dozens of excerpts, hardly pausing to empty the spit, and then proceed to plow through several concertos. My lips would hurt just listening.

Unfortunately his assignment once in the orchestra was nowhere near as demanding. Usually his part only required that he play a limited number of tonic and dominant notes with good intonation and tone. Is that too much to ask? Evidently. He would struggle feverishly and still wonder why his playing on stage never seemed to improve. That which was "too easy" to bother practicing was what he needed most. Often we ignore the obvious.

The purpose of the stage is not to practice or to go through your complete warm-up routine. The audience pays to hear the show, not endless valiant attempts before it starts. Even before rehearsals, the stage is not the forum for repeated trial and error sessions at full volume. As with the private warm-up, discretion rules, for your own preservation and for that of others. Great players shine when it counts.

Whatever method of limbering up works best, do it carefully and wisely. It can include some bold and confident beltings, but it must be balanced with modest samplings of all the stuff you are required to do. You must be prepared to do it all, and then to do it again, concert after concert. Warm up accordingly.
Posted by Phil Collins at 11:20 AM 2 comments: