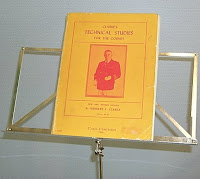 Back in the golden age of famous cornet soloists, the great Herbert Clarke revealed his secret for developing and maintaining a healthy embouchure. Although pretty much neglected by everyone under the age of 25 (and often beyond), his book contains the remedy for much of what ails today's trumpet players. Actually it is not a secret, for the answer is right there on every page of his Technical Studies.

Clarke's little book still stands today as a primary go-to resource. Although many have the book, few use it as intended. His prescription for a pummeled and unresponsive embouchure is staring at us on every page of his Technical Studies. Whether building technique or restoring after abuse, it still works. So what's the answer?

The remedy is pianissimo. By insisting on a soft dynamic, impurities of sound and deficiencies of technique quickly manifest themselves, making obvious the needed corrections. Fortissimo playing tends to obscure a multitude of problems, but quiet smooth playing quickly reveals weaknesses.

I remember Mel Broiles being asked what single skill defines a great trumpet player. His answer was surprising. Knowing his powerful and distinctive playing style, we expected him to tout a superhuman endurance, the most powerful and penetrating sound, or an amazing ability to transpose accurately on sight, or a dazzling high range, or a high degree of drama, or even the most ravishing trumpet sound on the planet. But no. Mel simply said, "Great players can play soft." He gave us a memorable lesson in only five words!

If you arrived at Music Hall early enough when he soloed with the Pops, you could hear Doc Severinsen warming up softly back stage in his dressing room. It was quiet and unimpressive at first, but everyone knew that the fireworks would erupt in due time. Great playing begins each day with a soft and secure foundation. Doc's patient low decibel warmup was as important a lesson for us as was his spectacular explosive trumpet playing to follow. A soft patient warmup matters.

Old lady clerk: "Why hello! Welcome to Aunt Gloria's Hat Boutique, home of the finest headwear in Cincinnati. What can I show you today?"

You: "Well lady, my teacher said I need more style, more color, and more personality in my trumpet playing. It was strongly suggested that I get accustomed to wearing different hats. So here I am."

Very well then. Let me show you four hats that should definitely impress your professor.

How about this one over here? Full disclosure however. This one is not very popular. I've had no sales in recent memory. Young folks especially are not interested in wearing this hat for some reason. One student complained that it "creeped him out", saying it "stifled his artistic creativity."  However, try it on. I'm told it works wonders when it's worn daily. And I think it will go nicely with your ears. It's our lovely PERFECT INTONATION HAT!

Now walk this way, and I'll show you another. This is our coveted BEAUTIFUL SOUND HAT. Its amazing, but if you don't keep it on, quite frankly, your sound will stink badly. All sorts of junk will quickly pollute your tone. Here, try it on. Oh my! Yes indeed, you look gorgeous!

The next hat is a strange one, a bit of a chameleon actually. It will morph instantly from sharp and prickly, to suave and smooth depending on the music you are playing at the moment. It gives you subtle finesse as well as cutting-edge boldness! Your playing will take on shades of vividness you never knew you possessed! Put this on when you feel faint of heart, and watch what happens. This hat is my favorite, the CLEAR ARTICULATION HAT.

Now let me show you our best selling hat! These are flying off the shelves. However I must warn you that there is a disclaimer that is usually ignored. Side effects of overuse include high likelihood of injuries such as: swollen and/or split lips, loss of front teeth, strained esophagus, back problems, bowel blockage, and in some cases, severe infertility. But never mind that. This hat does wonders for your ego! Wear this as you enter the warm up room at your next audition. Fellow competitors will marvel and gawk with envy at your nonstop screeching power! Yes, you guessed it, our HIGH NOTE HAT.

Aunt Gloria: "You are quite welcome. Remember, never go hatless!"

All notes on display! 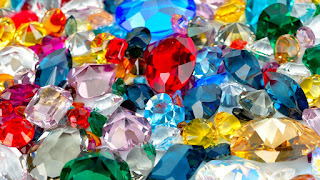 Imagine that all the notes you played today were on display in the window of your local jewelry store. Your advertisement reads: TOP QUALITY GEMS - REFINED, POLISHED, PURIFIED, READY FOR PURCHASE, AVAILABLE IN ALL SHAPES AND SIZES - BOLD, BRAZEN, BRIGHT, SPARKLING, RADIANT!

Ideally, a crowd of gawking passersby are standing amazed and eager to purchase large bundles of your valuable notes. "Wow, honey, look at those! They're gorgeous! Each one of them is perfect!"

Your job is to flood the market with an endless supply of solid-gold notes, always keeping in mind that cheap junky notes just won't sell. A daily commitment to refining and polishing is simply what you do. Being able to display a great product is worth the painstaking effort. Few are good at it because few have the clear vision and patience required. Rarely do you hear students carefully preparing each note, one by one.

What constitutes a high-priced note? Each has great quality of sound regardless of size. Each is clear and well-defined, with accurate pitch. Each great note fits properly into its phrase.  Fuzzy edges and unfocused tone are immediate disqualifiers.  If listeners were taking melodic dictation, they must easily be able to notate what you are performing. Your music critics will honestly use adjectives like clean, clear, vivid, solid, secure, stunning!

When your brain is programmed like that, your embouchure will start to cooperate, and your product will improve dramatically!

Posted by Phil Collins at 12:10 PM No comments:

The Powerful Weapon Against Nerves 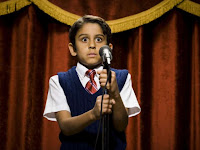 "I don't know what happened. I thought I was totally prepared, but as soon as I walked onto the stage, I froze and felt paralyzed. Even after all of those hours of preparation, nothing seemed to be working as intended!"

Although stage fright can be devastating, it is not a permanent or life-threatening ailment. Be encouraged. You can begin to exchange fear for confidence even under enormously high-stress situations.

So, what's the antidote for those "deer-in-the-headlights" moments? Is it more practicing, deeper breathing, more singing, more listening, more mouthpiece-buzzing, more thinking, or being super-resolute? All of those are important, but very likely your secret weapon has not been adequately utilized.

Simply put, your enthusiasm for what you are about to perform must be greater than your nervous doubts. By instilling this mindset firmly on a daily basis, you will be building an effective strategy that will withstand the paralyzing trauma of stage fright.

Bottom line. Strengthen your passion for music. Approach each etude, each excerpt, and each solo with a zeal for its musical message. Resist boredom. Inspired beautiful playing always matters. This applies even to your warm up. Aiming for musicality and expression is what fuels your success on stage and enables you to overcome nervousness.

Your job is way more than just producing notes. It brings into play the very reason we are invested in music. Without a strong consistent dedication to music-making, we become easy targets for the assaults of the dreaded nerve giant.

Posted by Phil Collins at 10:06 PM No comments:

Imagine yourself sitting right now in the most prestigious trumpet chair in the country! Nerves are not the issue here. We're looking instead at the benefits of having to produce at a high level with each note you play. With this in mind you will be on the fast track to becoming exceptional, distinctive, and inspiring!

True, you're not there yet, but why not pretend? Go into your next rehearsal or performance with that mindset. Have the focus and musical drive to excel no matter where you are today. Make others notice. Play like you belong in the best trumpet section on the planet! Compete with the giants of the past.

What a great way to prepare for upcoming auditions! It's not a matter of fear of failure, but of a strong passion for consistently producing way-above-average trumpet playing. Now that kind of preparation will greatly reduce excess nerves and self-doubt. It will also make your practice sessions much more efficient.

Remember, your eyes are not on the enormous canyon below your feet, but on the glorious finish line. Success at the end of the concert is a standing ovation. An ovation not for you but for your wonderful playing. You inspired. You entertained. "You're hired!"

Posted by Phil Collins at 8:48 PM No comments: