Almost a great picture. We wouldn't want to show out-of-focus prints to our friends, so why do we expect them to buy a bunch of fuzzy notes? With just a little extra attention we can produce a marketable crystal clear product.

Simply focus. Expect clarity and insist upon it. Adopt a no-junk mindset. A carefully centered mouthpiece buzz one note at a time does wonders. Start slowly and listen. The ear must be as critical as the eye. A free-flowing air stream must hit the center of each pitch. The sharper and flatter edges of the notes are not acceptable. Improvement happens better at slow speeds, so hold the camera still. Take aim, focus, and shoot.
Posted by Phil Collins at 7:22 PM No comments: 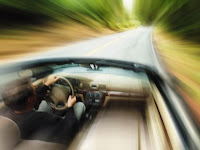 Remember the Charlie Chaplin movie where he is assembling widgets on a moving assembly line? All is fine until someone turns up the pace of the conveyor belt. As more and more widgets are advancing he inevitably looses control as widgets begin to fly everywhere. An hilarious moment for the audience, but desperation and panic time for him. We know the feeling, unfortunately.

Faster is rarely better, especially when control is vital. Details simply become a blur as the brain is unable to keep up with the excessive speed. Sightseeing while driving is a nice springtime activity. Ever notice how an attractive passerby can quickly bring traffic to a near stand still as brakes screech and heads turn? There you have it. Details are caught best at slow speeds.

Picture yourself behind your mouthpiece cruising down the page at a respectable speed. Suddenly the line of notes takes some rough turns with a few very awkward leaps. Next you wonder if you observed correctly those accidentals as you raced by. Not to worry, without skipping a beat you plow onward hoping to salvage something of the general idea of the piece. The notes are beginning to come at you faster than your brain can convert them to sounds. Soon like poor Charlie, you begin to crash into the trash.

A wise guitar instructor was a big help to me months before we were to record Stravinsky's Petroushka. He was disciplining his guitar student to play at half speed to develop security and control. I didn't think it was possible to play the Ballerina's Dance that slow, nor that there would be any value in it. Then I tried it. Sure enough, even at half tempo I was missing notes! Seemed impossible to do, but true! My new goal was to play only as fast as I could guarantee 100% of the notes in tune with clear tone.

Then began the long process of gradually picking up the pace, but only if all notes were securely on board. Eventually this process will pay off for you. In fact, no need to stop. Keep accelerating. Play beyond the required tempo. Too slow and too fast are great technique builders. Try it. You'll be amazed at the things you had been missing, and at the things you'll notice yourself able to control. Give your brain a chance to catch up.
Posted by Phil Collins at 8:37 PM 4 comments: