A Daily Lesson with Ernest Williams

Who was Ernest Williams, and why do we hear so little about him today? His Modern Method is sadly becoming a lost treasure. Some have preferred it to the Arbans Method. He was one of the greats in the trumpet and cornet playing world way back in the 20th century. Mr. Williams was as competent a teacher as he was a performer. He also was Director of the Ernest Williams School of Music, conductor of his University Symphonic Band, teacher at Juilliard, principal trumpet under Stokowski in the Philadelphia Orchestra, and renowned cornet soloist with the Goldman Band under Goldman himself.

My first teacher, a pupil of his, lectured us kids about the great Mr. Williams at every lesson. We were respectful of course, but what did we know? We did benefit however from strict adherence to his well-organized approach to technique-building. We were forbidden from practicing solos until the daily regimen of scales was completed. I'm sure my parents knew well every page of his book, and when I graduated from high school they must have been relieved that all of those scales, arps, and chroms would finally be leaving our N.J. home.

I like his repeated instruction between each chromatic line on page 155. "Do not attempt to play the following line until the preceding line sounds pure and free." Today it could be said many ways. "Do not even think about continuing until you go back and fix what you just messed up." Or, "Dude, NO!" Mr. Williams' effective one-sentence lesson can still stop us in our messy tracks. Repeated furious and out-of-control attempts are never useful. Being the gentleman that he was, I can imagine him calmly saying: "Slow down. Listen, and control what you are doing, one note at a time. It must sound pure and free."

Let's listen in as he might have given instruction for a student beginning work on the Honegger Intrada. I can imagine him demanding that the first two notes be connected and clear before climbing up to the F at the top of the phrase. "Play just the first four notes cleanly, connected and in tune. Good. Add two more. You may now attempt four more notes and continue only if you can maintain control and quality." As soon as the notes begin to come faster than they can be controlled, he suddenly interrupts, "Do not proceed until the preceding notes sound pure and free!"

What great advice! Mr. Williams' one sentence can be our daily lesson. Enough said.
Posted by Phil Collins at 10:49 PM No comments:

Playing for a Living?

It seems like we struggle with half of our brains tied behind our backs, and yet wonder why our trumpet-playing is more boring than rewarding. We go about our days cleaning, dusting, mopping, scrubbing, polishing and maybe even doing a thorough job of it. Yet half of our brain often lies dormant as our most productive weapon is bound and gagged. The Seven Dwarfs seemed to have learned this lesson in spite of their handicapped temperaments. They "Whistled While They Worked" and sang "Heigh-ho, heigh-ho, it's off to work we go!" Can that fantasy become reality?

Our assignments involve lots of technique work for sure. You can't avoid a thorough focus on basic issues of playing even for a single day. But how can they become a welcome challenge without a total meltdown of musical enjoyment? That's the difficulty.

This is not about being an obnoxious Pollyanna in the workplace, but rather in the practice room. The secret to a rewarding music career is learning to enjoy the work (as much as possible.) For example, can octave work also be considered a musical project? Can arpeggios be artistic? Must all scales only function as wallpaper designs in a score? How about slow warm-up slurs? Do they have to be a-musical? Where does it demand that all very high notes must sound strained and too loud? Does intonation-fixing have to be musically void? Are static notes useful in recitals? Can concerto work be more than an accuracy contest? Is it possible to transpose and sound good at the same time?

You've heard it said about some players that they did not seem to have a musical bone in their bodies? For others, it seemed that they could not play an unmusical note even if they tried! It must be a matter of developing musical instincts. A rewarding music career is not just about an awesome technique, or a beautiful expressive tone. A successful musician, no matter what the venue, is one who learns to enjoy working musically on a daily basis. Without the fun, it is only a job. Play for a living. 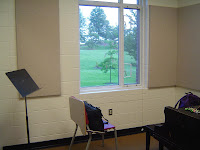 The defining questions in the minds of the audition committee: "Can we hire this person? Do we want to listen to him/her every day? Will the maestro go for this kind of playing?" Of course there are also those usual matters of sound quality, intonation, blendability, and musicianship. Those must all be givens, but are any stand-out qualities being communicated? In short, what will be their instinctive reaction upon hearing you? Deal or no deal?

Never mind the audition scenario. Let's visit your practice room. Would the committee want to offer you a nice contract based on what they heard outside your practice room today? Is your practice marketable? Will your notes sell? Or as Erich Kunzel asked a new young arranger on his first job, "Hey, kid. Are you any good?" (He was about to find out!)

Why not begin your next practice session with the mindset that all that you are about to play matters? You are being listened to and evaluated. Don't freak. Just enjoy why you're there. If you don't, they won't. Purify your notes and clean them up. Prime time may be nearer than you think. Very nice performances can happen in the practice building. Why not amaze your friends!
Posted by Phil Collins at 6:50 PM No comments: