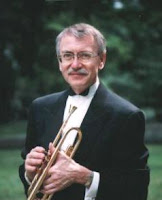 In the corner of a small room at Giardinelli's, Fred Mills sat patiently with me for a good hour as I struggled to find my next trumpet. He was very quiet but attentive, only offering brief advice when asked. Finally running out of steam, I asked if he would like to play them. Without any warm up he instantly played several very impressive and well-focused arpeggios, rendered his verdict, and handed the best horn back to me. I remember feeling like I had been hurling tons of mud at a brick wall. Fred just nailed it in less than a minute by skillfully throwing a dart at the bulls eye for me.

Some are talkers. Fred was a listener. In the few times I met and spoke with Fred, I remember him as a modest man who was always more interested in how you were doing than keeping you up to date on his own activities. When speaking of himself, it was always understated. I was impressed with him as a person and of course as a giant in the business. His terrific playing in the Canadian Brass spoke for itself. He seemed to get even better with time. An amazing list of accomplishments follows him.

An enormous amount of experience, wit, and friendliness was not far beneath that deadpan expression. Fred died in a car accident in Athens, Georgia. It was a sudden and very sad loss. He will be greatly missed.
Posted by Phil Collins at 10:14 AM

Thanks for this Phil -- coming from you this is extremely high praise indeed. Fred has left a treasure trove of wonderful memories for lots of people, but when a musician of your magnitude can express this warmth he felt with Fred, it illuminates the most important memory of all.
You followed Freddy as Principal Trumpet in Ottawa, so I know you are well aware of the effect he always had on the community around him. best wishes to you and your family. chuck daellenbach