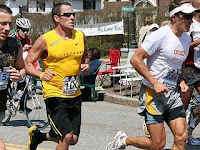 It was 1971 and James Levine was conducting Mahler 5 with the CIM orchestra. As students it was our first fifth! It was to be a big deal, the highlight, the main event of the semester. Levine and Mahler? No pressure.

Two things stood out during those several intense weeks of rehearsing. Our first lesson became clear even before we had finished the first rehearsal. Playing with all the gusto we could muster, we quickly realized that this was to be a long haul, and we had only just begun. Lesson #1: PACING.

Levine was great at preparing us to be at our best at show time. What good is a fabulous rehearsal if the concert is disappointing? We were getting a crash course in survival, (poor choice of words).

A great concert of course, is not just about getting through the music. The audience is more interested in heroes than survivors. A wise hero is better than a survivor, but a wise survivor is better than a dead hero. So it's a balance between playing it safe and cozy, and letting it all hang out. We were each learning to chart our own courses.

Lesson #2 was about PURPOSE. It came with Mr. Levine's instructions at the end of the last rehearsal before the big concert. He mopped his brow with that ever-present towel slung over his shoulder, and paused before offering his final advice. It was the best coach's pep talk one good receive. It has served as great motivation, and has helped to reduce anxiety for years of concerts and recording sessions.

"Don't be worrying about missing notes. The audience isn't coming to count mistakes. They expect to hear great music. See how many fabulous moments you can produce. You will want to remember this night."
Posted by Phil Collins at 10:47 AM