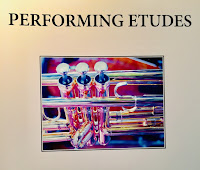 I just purchased this book after listening to James Wilt's many returns to them on his YouTube channel. Too many things to comment, however I'll just say this: I like to play them! Thanks and all the best.