More Valuable Than a Chair 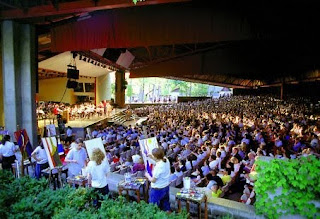 It was August at Interlochen in 1965 at the National Music Camp. I had managed to maintain my first chair status in the Band and Orchestra in spite of weekly tryouts and challenges to my reign. Week after week the defiant challengers had been successfully beaten back only to slink back to their lowly ranks at the bottom of the section. Competition was intense and our emotions were definitely very much involved. After all, this was war, dog-eat-dog, survival of the best, etc. Such was our mindset for better and for worse.

Well the day eventually arrived. Perhaps a little over-confident and under-prepared, I was dethroned by a better-prepared and fired-up challenger. With eyes closed and a show of hands, the verdict was announced: "MOVE HIM DOWN TO THE SECOND CHAIR." Surely, the voting had been rigged! What could they have been thinking or hearing? Such humiliation! How could life go from so very good to horrible in a single moment? Just like that there was no joy in Mudville. I had struck out and life might as well have been over forever.

As I had apparently been unable to conceal my pouting bitter attitude, one wise conductor on the staff took me aside to give some advice that was far more important than sitting first chair that week. "Phil, no matter where you sit, it doesn't change how you play. Give someone else a chance and don't worry about it." The lesson was one that helped my return to some stability that week, and also would echo as a reminder for similar struggles in the future.

A seating change perhaps showed me a lot about who I really was. Emotional stability and self worth does not depend on the position we occupy, for we are more valuable than a chair. Our identities are so easily linked to our achievement. In fact, humility and teamwork are probably learned better by playing second fiddle. I have observed that often the real heroes are the section players.

Life is full of bitter defeats, but they can provide the very lessons we must learn and could learn no other way. Someone said, "If mountains were smooth, no one could climb them."
Posted by Phil Collins at 7:26 AM

I was there and think that it was Doug Sutherland who won that week's challenge. He also was my roommate at Indiana University freshman year, but by then he wasn't even playing trumpet anymore. He thought his embouchure, which I thought was perfect, wasn't good enough and tried to change it. That resulted in ruining not only his playing but his mental status as well. I talked him into studying with Mr. William Adam but he unfortunately never got his amazing talent back.