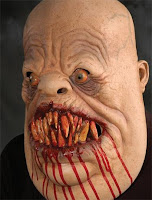 Lurking behind the curtains or perched high on the catwalks, our old nemesis the Nerve Giant resides. Sneering silently, he watches for each contestant to make his and her way to the front of the stage. Today is audition day, and he is having himself a good old time. At just the right moment, he begins to make his moves on each unsuspecting victim. Quickly he pounces and inflicts his debilitating tactics on as many as he can. Strangely, he is never seen, but surely felt.

His first task is to suck up all of the oxygen from the stage, rendering normal breathing nearly impossible. Next he instills crippling fear as evidenced by those nasty involuntary lip, finger and knee tremors. The right hand then begins to clutch the valves, causing them to stick uncharacteristically. No matter how many times the spit valve is nervously emptied, nothing comes out! We have no air, no condensation, and no sound.

He effectively renders the confident, disconsolate. Our snarling excerpt enemy then retreats to the darkest corner, preparing to eliminate his next victim. His goal is to hear this verdict from the personnel manager at the end of the day: "Ladies and gentlemen, it looks like we do not have a winner. We will have to hold more auditions sometime in the future." The phantom of the auditions howls from on high.

Fortunately, this all-to-familiar scenario has a very potent remedy. The Nerve Giant can definitely be defeated. He is vulnerable. It takes some time and resolve, but it can be done. In fact, he can be made to work for the contestant, not against him.

Many have suggested that the antidote is AIR. But no, this is only a tool. AIR by itself isn't enough to kill the beast. The best weapon against the Nerve Giant is PURPOSE. That is, an unshakable confidence in the message about to be delivered. If PURPOSE has become strong enough, and has been time-tested, it makes the contestant virtually invincible. Nerves only intensify the resolve. And when accompanied by a sufficient supply of AIR, there is no giant too scary, no part too high, no valley too low. Strong PURPOSE marshals all body parts to function in harmony, summoning enough adrenaline, concentration, and artistic instincts to get the job done regardless of nerve pressures. PURPOSE RULES!
Posted by Phil Collins at 7:47 AM